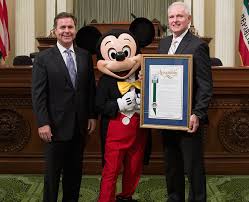 The actual 60th anniversary of Disneyland is still a few weeks away, but that didn’t stop the celebration and recognition of the beloved theme park.

Earlier this week, Disneyland Resort President Michael Colglazier and Mickey Mouse traveled to Sacramento, California to meet with state officials to officially proclaim every June 1 as  Disneyland Day throughout the State of California.

As with many of the other special days that governments bestow, the gesture is used more of as an honorary title as opposed to an official holiday. Nevertheless, these honors aren’t given out lightly and are meant for public reflection.

Disneyland Day is yet another gesture from the State of California’s that reflects the state’s cherished tie with the California theme park. Earlier last year, Disneyland donated the iconic California letters that were at the entrance to Disney California Adventure Park when it first opened to the California State Fair.