Inside Out won the Oscar for Best Animated Feature yesterday night for its stunning animation and heartfelt look into the human emotions of a young girl struggling with moving to a new city. Amazing films like Inside Out are not easy to make, requiring great team of creative visionaries to bring a unique vision like it to the big screen.

This past Thursday, industry members gathered at the Samuel Goldwyn Theater for the 15th annual Animated Features night by the Academy of Motion Pictures Arts and Sciences to discuss their nominated animated features and the process behind creating them with Disney’s very own Roy Conli (Treasure Planet, Tangled, Big Hero 6), Don Hall (Winnie the Pooh, Big Hero 6), and Chris Williams (Bolt, Big Hero 6) as hosts. Of the many guests in attendance, director Pete Docter (Toy Story, Up) and producer Jonas Rivera (Cars, Up) were there to tell their story about working on the Oscar-winning film.

For some films, they see many different changes to the story during development, but Pete Docter felt that Inside Out was one of the “most consistent” films he’s worked on from the beginning to the end. It did not see many changes, but there were plenty of details that needed to be spelled out to help make Inside Out an enjoyable experience.

“I came from animation so I used to really love that––still do,” Pete said as he thought about his favorite part of the process of making the film. “I like the unknown and mysterious part of […] story development, the stuff where you don’t know what will happen.”

Ironically for Jonas Rivera, he felt the opposite. “I love animation, but I am not an animator,” he mentioned in a humored tone. “When you first see Joy or a character move or breathe […] or come to life, that is when it gets so real and good and you can see it come together one frame at a time.” 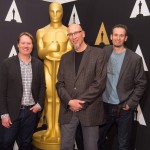 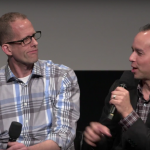 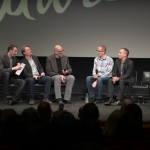 A lot of Inside Out’s development was equal parts writing and drawing, but plenty of the story started from drawings and then turned into script. That was not the case all of the time, as people like Josh Cooley and Simon Rich would write brilliantly hilarious pieces of script for the film and try to figure out how to piece together sequences.

Piecing together sequences in a film requires more than writing and drawing, but also having a solid vision behind the story. With a concept as abstract as depicting emotions, it seemed like Inside Out could have easily lost itself in that. The creative staff wanted to “talk about things that are important to us as living breathing adults” and Pixar allowed them to craft a story that could reach that balance of entertaining both demographics while remaining effectual and fun.

Pitching the idea behind Inside Out presented its difficulties, but they never really felt they would have a hard time convincing kids to watch. ““Are the kids going to get it?” We knew kids are way smarter than we give them credit for. In the end we had to simplify it a little for the executives!”

“Pete movie’s […] are these beautiful observations of truthful things but done in a really fun, whimsical way.” Jonas was quick to give his praise to Pete as he discussed how he felt that the they were cut from the same kind of cloth. Having a love for the same films, especially early Disney movies, helped to unite them together to create wonderful and memorable stories over the years. “Our hope is that they let us do it until we blow it!”

It seemed as though they were rather close to just that when they were developing the story early on, though. Sadness and Joy were always planned to be the main characters of Inside Out, but Pete had actually made the decision to go with Fear and Joy as the main duo for a while. Three years into development, staff found that the story never ended with Fear as the main character. “There was no real punchline,” Jonas and Pete agreed. “What does Fear teach to Joy that she couldn’t do at the beginning?” There was no satisfying answer to that, and so they were compelled to switch back Sadness as Joy’s companion on their journey through Riley’s mind.

With that simple juxtaposition of Joy with Sadness, the idea that even the emotions that make people unhappy are necessary to live was made complete and the end result was a wonderful tale that will be remembered by audiences for years to come.