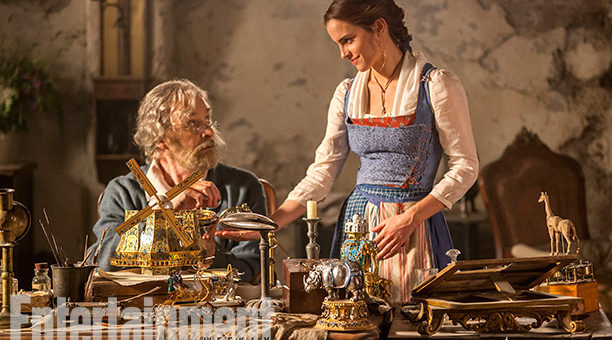 Last week revealed an enormous amount of news for Disney’s new live-action Beauty and the Beast: first, Entertainment Weekly released the first images of the film, finally revealing elements like Belle’s ballgown and Beast’s design. Oh My Disney then kept the news going, letting us know a little more about how Belle’s character in this new version is slightly different than her cartoon counterpart.

“In the animated movie, it’s her father who is the inventor, and we actually co-opted that for Belle,” Emma Watson told Entertainment Weekly. “I was like, ‘Well, there was never very much information or detail at the beginning of the story as to why Belle didn’t fit in, other than she liked books. Also what is she doing with her time?’ So, we created a backstory for her, which was that she had invented a kind of washing machine, so that, instead of doing laundry, she could sit and use that time to read instead. So, yeah, we made Belle an inventor.”

So rather than having Maurice be the only inventor in the family, Belle takes on a knack for tinkering as well, while still retaining her iconic love for reading. Watson’s comments make it clear that reading is still in the forefront of Belle’s interests, and that her inventions, in fact, all contribute to her ability to read even more.

Oh My Disney also shared that Maurice gains a deeper character in this film, and while he’s still an inventor, the live-action Beauty and the Beast has him build something in particular: music boxes.

It’s exciting to know that this live-action Beauty and the Beast will give us an even deeper look at some of our favorite characters, while still retaining familiar elements from the animated version.

Check back for more news on Beauty and the Beast, which you can see in theaters March 17, 2017.