“I’m terrible at basketball,” said Glen Keane to me over the phone. The 63-year-old might not have what it takes to sink hoops, but he can draw. And animate. So when NBA legend and former L.A. Lakers star Kobe Bryant called him to ask if he could animated a short about his basketball career, what would Keane do? The answer begins as one of his “championship” times as an animator came to an end.

His legendary, award-winning work has been seen in Disney’s most beloved animated films like “Beauty and the Beast” and “Tangled.” When he decided to leave Disney in 2012, he claimed he felt something new calling him, but didn’t know what it was.

Over the course of the following years, Keane found himself sharing his gift of animating with industries and mediums that weren’t typically known for the art form. Google hired him to create “Duet,” combining GPS/360 degree with animation. Then it was the Paris Ballet and animating a ballerina’s routine, which Keane called “refreshing and exciting.”

Bryant is very fond of the animation community and knew of Keane and his work early on. But when Kobe Bryant called Keane in early 2016, he couldn’t imagine himself doing his next animated project on something very foreign to him.

“I told him that you had the worst basketball player in the world animating a your basketball story,” Keane said. “But he said that’s OK and that everything you’d need to know about the game could be done by studying him.”

Before studying him, however, Keane had to also challenge himself by understanding how he could animate Bryant’s basketball story through the poem/open letter that he wrote to announce his retirement from playing back in 2015.

“I’ve long been intrigued of animating to poems,” Keane said. “I often think of animating as a visual poem, so I was delighted to see that Kobe decided to share this news through an expressive ways and not just a letter.”

With that, Keane did what he had always done since his days at Disney and animating features – read between the lines. By asking himself what the purpose of this poem would be, it ultimately guided his initial storyboards and visuals that would accompany the “Dear Basketball” words.

Keane continued, “I found two things that needed to get across through my drawings: his (Kobe’s) vulnerability and his desire to inspire the next generation of greatness.” 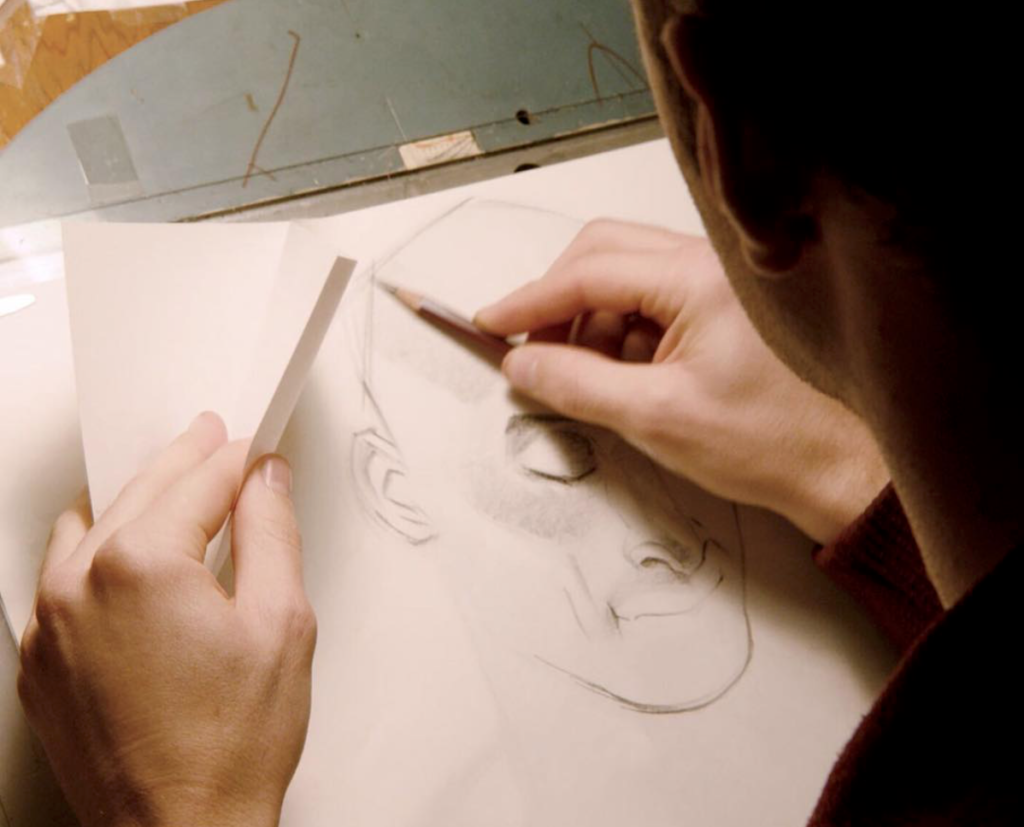 Those two themes still needed a visual representation. That ultimately came through Keane’s son and animator, Max, who took the opportunity to create his own storyboard when Keane had to take an unexpected trip to France. What he saw when he returned was something that took him off-guard completely, but was that visual that he needed.

Keane said, “The key element to this thing was right under my nose, right at the beginning of Kobe’s poem and I completely missed it…”

From the moment
I started rolling my dad’s tube socks
And shooting imaginary
Game-winning shots
In the Great Western Forum
I knew one thing was real:

I fell in love with you.

Keane loved the idea so much that he ultimately took the idea to Bryant to pitch, but also get help in how exactly he rolled his dad’s socks. Bryant did show Keane and his son how he rolled his socks during a visit to Kobe’s studio in Newport Beach, CA, but expressed how important the tube socks were in his love for the sport.

“Those details were everything to him,” Keane said. “And it didn’t stop there – he sent everything from what his room and how he looked like as a child…” It actually made Keane’s job easier since he didn’t have to imagine every part of Bryant’s story.

“Everything you see visually is true. That is Kobe’s life right in front of you,” he said.

The rolling of the tube socks scene isn’t the only scene that takes up the 4-minute short. Together with a team of two animators, one in Los Angeles and one in France, Keane took 9 months to create the other scenes that would accompany the rest of the 293-word poem. They weren’t in a rush to complete it by a deadline either, which allowed Keane and his team the freedom to do it “right.”

“Every step of the project needed to proceed slowly and meticulously because this was a personal project,” Keane said. “Our hand-drawn, expressive animation style needed to be personal. The music also needed to reflect that level of personal that Kobe’s words were.”

The “Dear Basketball” short would ultimately gain the attention of the media again when it was announced that another legend would create the music – John Williams. Bryant, a known fan of Williams’ orchestra music, asked Williams to write the music after Keane completed work on the animation.

Keane interjected, “Our first ever meeting we had about this project was not talking about animation, but our mutual love of Beethoven. He played his championship game mentally listen to Beethoven’s 5th Symphony and I animated Beast’s transformation (in “Beauty and the Beast”) to Beethoven’s 9th.”

He continued, “In other words, we find that music was an engine that drove our success.”

Keane shared that Williams would go his traditional way of scoring films by watching the film only when the visuals were completed and then “spotting” it and putting the musical cues at the appropriate moments. Williams, however, didn’t have such a difficult job writing new music since Bryant and Keane both sent “pointers” on what feeling and tone the music should have.

Keane said, “We found that William’s score from ‘Empire of the Sun‘ had the right amount of sensitivity, gentleness, and grandeur to it. The music needed to be understated.”

Williams’ music in making it an “understatement” wasn’t to discredit Williams’ ability to write grand music like most of his film scores are, but to match the Bryant’s tone in his poem. “He (Kobe) wasn’t trying to sell it (his story), even in his narration of the poem for the short,” Keane said. “The music needed to follow suit and John was perfectly fine with that.”

Toward the end of the 9-month production schedule, all three giants, Bryant, Keane, and Williams, walked into a scoring stage in Los Angeles where an 80-piece orchestra (which Williams was using to record the score for “Star Wars: The Last Jedi” at the time) was ready to record the music that would accompany Bryant’s materialized, drawn out, basketball journey from beginning to end.

Now that the short is completed and awaiting its public release, the world is eagerly anticipating the Black Mamba’s animated tale. As for Keane, he had the last say when it came to teaching the basketball legend a new trick.

Keane recalled a time when Bryant saw him sketching a scene from early on in production. “He (Kobe) didn’t quite understand what it took to create a frame of animation at first,” Keane said. “It wasn’t until he looked over my shoulder and see me animate that he really got it!”

It was a mutual exclamation of elated shock and awe, though. It’s something that one should expect when you put two legends together to work on something they collectively love doing. It’s a masterclass of sorts where the masters themselves are both teacher and student.

“Kobe would act as astounded as I would be amazed at studying what he did,” Keane concluded.

You can watch the entire “Dear Basketball” film by clicking HERE.

Our special thanks to Glen Keane and Kobe Bryant for contributing their time for this story! 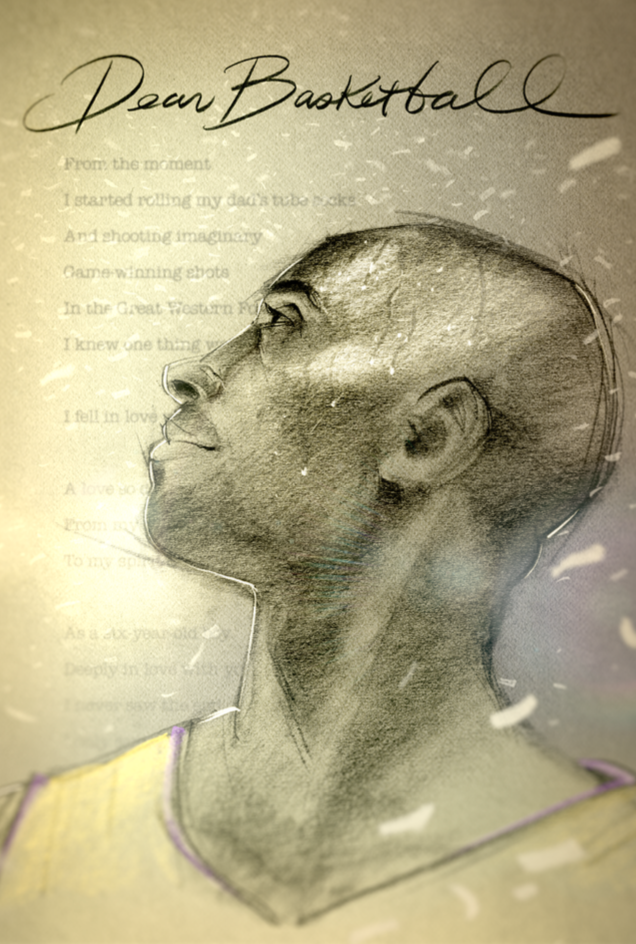