Bao, the newest Pixar short film, tells the story of a Chinese-Canadian mother who, after her children leave her with an empty nest, gets another shot at parenthood when one of her dumplings comes to life. It will be shown before Incredibles 2, which comes to theaters in June 2018.

The already heartstring-tugging summary hints at the emotion that will pervade the seven and a half minute short. Within this short time, Bao aims to tackle themes of motherhood, parenting, loneliness, and more. EW reports how many Pixar employees jumped at the opportunity to work on the short film after concept images were first presented at a studio-wide meeting. “We got a ton of e-mails from people identifying with the mom character, or the dumpling character, saying, ‘Wait, that’s me,’ or ‘That’s my parents,’ or ‘I’m dealing with this right now,'” said Domee Shi, director of Bao.

Shi, who makes history as Pixar’s first female short director, says the idea came from her own experience as an only child to Chinese immigrants. “Often times it felt like my mom would treat me like a precious little dumpling, wanting to make sure I was safe, that I didn’t go out late, all that stuff,” Shi told EW. “I just wanted to create this magical, modern-day fairy tale, kind of like a Chinese Gingerbread Man story. The word ‘bao’ actually means two things in Chinese: Said one way, it means steamed bun. Said another, it means something precious. A treasure.”

Motherhood touches every part of this short film, and is prevalent even in its creation. In fact, much of the short film’s inspiration is literally thanks to Shi’s mother, Ningsha Zhong, who served as a cultural consultant on the film, allowing the crew to film her cooking dumplings as reference for animators. “We [basically] recreated those shots with her hands and used them as the reference for animation,” Shi comments. 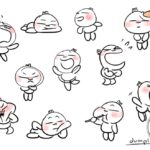 Creators also note the authenticity that went into cooking up Bao. “You know Pixar and you know the special effects we can pull off here: explosions and water and splashes and fire and fireworks,” says Bekcy Neiman-Cobb, producer. “One of the biggest challenges, and what brought our effects department to their knees, was Dumpling’s pork filling. That was hard. We learned there’s a very fine line between looking delicious and appetizing and looking wrong or gross. Making our food look delicious was a big triumph.” This effort results in art we’re already excited about, including a Gudetama-esque design for the titular character.

Motherhood also brings up another closely related concept: cultural heritage. Shi and her mother’s joint effort to create the short reflects the way culture is passed down from one generation to another, taking on new elements while still remaining true to cultural history. As Bao names both a mother and a food as its main characters, it’s evident that the short will be exploring this new ground while still making us feel real emotion, as Pixar shorts so often do.