For these past 30 years, Disney Legend Bill Farmer has given the iconic Disney dogs Goofy and Pluto their voice and err…barks. As a voiceover actor, Farmer has rarely stepped in front of a camera because he never had to.

So when his friend presented him an idea for a TV show, he got excited like he would a canine. “It’s my first time in front of a camera, let alone a host for a TV show!,” Farmer said to us in a media phone conference.

As for the show itself that he’d be playing host, it wasn’t far from Farmer’s voiceover career either. It was during a trip to Reno, Nevada with a friend a few years ago to tape a story about dogs for a local newscast that his friend (and cameraman) mentioned he’d make a great host for his own TV show – about dogs.

Together with his wife, Jennifer, who has directed and produced projects and their cameraman/idea-man friend Steve, they quickly put together a pitch. “[The idea was] for me as a voice of a dog for a long time [to step out and do] a show on real-life dogs,” Farmer said.

His connections at Disney led to a pitch to Disney+ who loved the idea that they gave it a greenlight. And then it was off to have his own dogs tended to so they could go and make the show a reality!

Farmer continued, “We travelled to 11 state in about four months…filming these amazing dogs and their caretakers, all of which had such unique stories.”

If there’s one unique thing about “It’s a Dog’s Life” is that the stories of these dogs very much reveal that dogs are much more than a person’s best friend. In the pilot episode, we get introduced to Eva, a Jack Russell Pitbull mix whose job is to sniff out whale poop so that scientists who research them could monitor their health through those samples.

We kid you not. 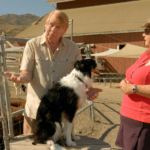 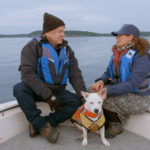 And Farmer wasn’t kidding either seeing first-hand in the episode how Eva did that work successfully. In that same debut episode, you’ll also meet a few Border Collies who are trained to herd sheep – all without any guidance from their handlers except for a whistle from them. “I can barely get my dog to sit at my command!,” Farmer laughed when recalling the story and commenting on what it was like to film live with these dogs.

The show in the early screeners we saw so far feel a lot less educational as you might imagine, with Farmer saying that it wasn’t intentionally meant to be very educational. He continued, “I just asked the questions I wanted to know, and that kept it more real, I thought.”

Combine all that style of off-the-cuff interactions with Farmer’s personality including multiple Goofy and Pluto appearances and cute dogs (of course!) and you have a recipe for quite an entertaining show.

However, one of the things that you’ll end up learning with each episode you watch is that like their human counterparts, each dog has their own unique ability to “find.” Through the power of their noses and energy levels, you’ll see multiple examples of dogs sniffing for things like whale poop, all the way to diseases – like Coronavirus. “That would be a very useful talent if we can find some dogs that do that…it’s amazing what dogs can do in the medical profession,” Farmer said.

It’s a Dog’s Life with Bill Farmer is exclusively now streaming its pilot episode on Disney+ and will release it’s 10-episode first season one episode at a time every Friday.

Our special thanks to Bill Farmer for contributing to this story!