Disney Animation’s “Us Again,” which initially debuted in front of their latest feature “Raya and the Last Dragon” is now streaming on Disney+. It’s the Mouse House’s first animated short in five years, and arguably its most beautiful to date.

We caught up with the creator’s of the short to talk more about it, the dancing, the music, and the creative process that made it all happen!

Editor’s note: the below interviews were edited and condensed for clarity.

DE: It seems much of the short was driven by the music. How did that all come together?

Pinar: In the beginning, there really was nothing to base the music off of, but Zach honed in on the music early on. We were going to go for funk and soul, so I went and did my first pass, which was based on what Zach called an ‘emotional map.’ Imagine a cardiogram with emotions kind of going up and down and color-coded to what Art and Dot (the main characters) were feeling. It was incredibly helpful because this was all before they had an art or storyboards. I couldn’t write to nothing! Once we had all that, though, it was all fine tuning. I ended up studying Keone & Mari’s (choreographers) movements for the characters so that the music could sync up with that as well where every pop and hit would translate into something.

DE: A lot of the process for every aspect of the short was unending iteration. How were you all able to find anything to actually make it all into something?

Brad: I guess I’m one of those guys that kind of thrives on that kind of creative process. Knowing when you really need to make a creative decision versus when you’re forcing a creative idea to just be done with it is a difficult balance. But if you can keep all the balls in the air and keep the assets going and keep music producing and keep the dancer and the choreographers in the loop and thinking about the process, you can hit that critical mark and start delivering some elements. It helps when everyone’s in the loop because everybody has understood all the iterations. And they’ve understood why we made the decisions we did. So by the time you get to actually locking it in, everybody goes, yep, we’re locking it in.

Final animation was completed within a few weeks mid-pandemic. Music was also safely recorded with live musicians in a safe environment also mid-pandemic. 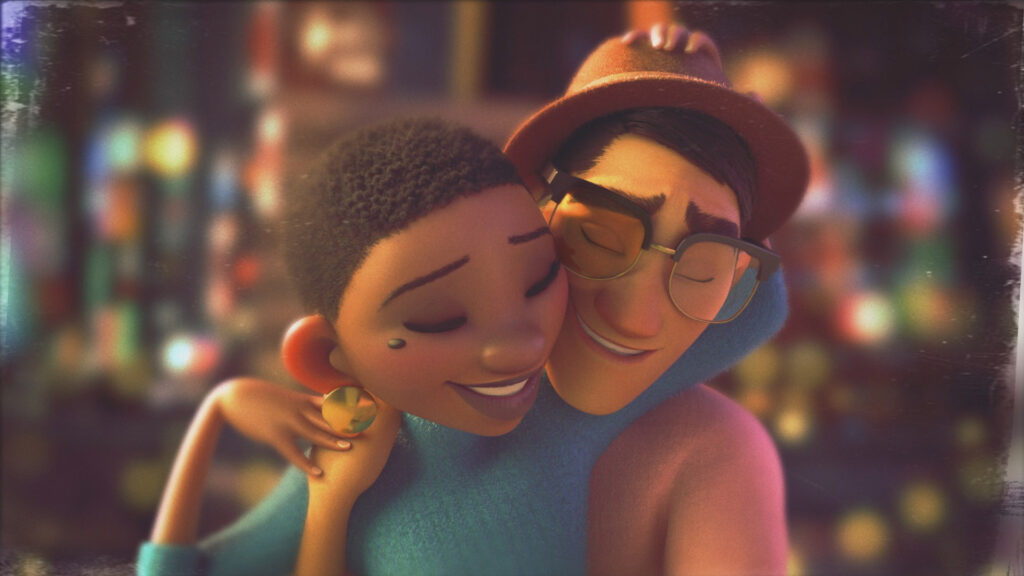 DE: Let’s chat more about the choreography. I know Keone & Mari were invited to take part and literally choreograph the animated characters movements, but once again before any art was created. How challenging was that?

Zach: We were talking in the abstract a lot. I knew I wanted to do something with them and have dance be a driver of the story. So once the story got locked, it really was me basically me with a monitor over my shoulder pointing to a screen showing them some visual samples of what’s happening during this section e.g. here’s what they’re saying or doing, here’s the general framing of what the shots are going to be. With that, I leave that up to you to interpret how that’s going to look like in dance moves. Keone and Mari are so good at fusing purposeful story in their choreos, so they came back with like six awesome options, and they made me pick one. They are so good!

Keone: Zach was just so articulate and specific about communicating what needs to be happening in every scene so that we understand what the blocking looks like, what the framing might be, because that all is important to us. And that collaborative communication, and Zach giving us all the tools to make choices within scenes, I got to say, it wasn’t so challenging. It was really up to us to make the moves and make sure that the moves had an arc and told a story, with it all being the right choice to a specific sound, which obviously comes in with the music coming in so early.

DE: The short is also a first when it comes to representation with a mixed race couple (like Zach and his wife being mixed) and many creatives behind it (with Keone & Mari being Filipino). What about the short makes it also so universal?

Mari: I think dance is universal. It changes depending on where you’re at in the world, or what culture you come from, but dance is everywhere. We’ve traveled all over the world and we can go to a place where nobody speaks the same language. But we can start dancing to music and everybody understands what you’re emoting, and everyone can share in that. So I think that’s something so powerful about dance, and I’m so happy that we were given the opportunity to showcase it in that way.

Our special thanks to Zach, Brad, Pinar, and Keone & Mari for contributing to this story! Disney’s “Us Again” is now streaming exclusively on Disney+.