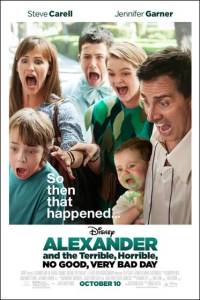 “Alexander and the Terrible, Horrible, No Good, Very Bad Day” comes out that day, giving the world a look into the balance between good days and bad days.

The film shows a day in the life of Alexander, an 11-year-old boy who happens to be very unlucky. For his family, on the other hand, life seems to be going great, leaving Alexander (Ed Oxenbould) wondering if he’s alone in his bad luck. Everything changes when his family, made up of his mom (Jennifer Garner), dad, (Steve Carell), brother (Dylan Minnette), and sister (Kerris Dorsey), find themselves in their own very bad days, with only Alexander there to help them all through as a family.

There’s no doubt that this movie was made for families – it’s all about a family who struggles through life together! If you’ve heard of the title before, you aren’t alone, too. The film is based on the acclaimed children’s book of the same title written by Judith Viorst, which has won numerous awards and was even featured on Reading Rainbow.

It’s exciting to see how a popular children’s book is being translated into a full-length Disney feature film. After watching the first trailer of the film, we can expect that the ensemble cast will be quite funny as they are led by funny man Steve Carell, well-known for his career as a comedian, who also seems to be making a solid transition into humorous family movies. All in all, it’s a film that we think will be the quintessential Disney family film that we haven’t seen in a while.

“I think that you just gotta have the bad days so you can love the good days even more,” says Alexander in the film. Do you think that’s true? Do you think this movie will tell that story even more? Why do you think Steve Carell did his first (Disney) family film? Comment below!