Yesterday in front of Sleeping Beauty Castle at Disneyland Park, Disneyland Resort President Michael Colglazier announced the two existing Cast Members that would become the next Disneyland Resort Ambassadors. Before that took place, event organizers found it fit to recognize the rich heritage of the Ambassador program.

This announcement event was particularly special since this year’s Ambassadors would serve at a landmark time that includes the 50th anniversary of the program and the 60th anniversary of Disneyland Park. To celebrate the occasion, the first-ever Disneyland Ambassador Julie Reihem-Casaletto (chosen by Walt Disney himself) opened up the event with a magical speech that gave insight into her experiences serving and how she’s happy to see the Resort in good shape with help from the Ambassadors. In an interview she did with us in the Disneyland Dream Suite, Reihem added that “Disneyland is still thriving and all her Ambassadors are thriving. I’m happy to see that Walt’s legacy is flourishing through both.”

Beginning in 1965 at the request of Mr. Disney, the Disneyland Ambassador Program was created to alleviate the numerous requests that Mr. Disney received for his time. From conducting media interviews, making public appearances, hosting VIP guests, and representing the thousands of their fellow Cast Members, the Ambassadors today still make sure that the Disneyland Resort always had a constant presence with anyone and everyone, even when Mr. Disney’s and his charm weren’t available. 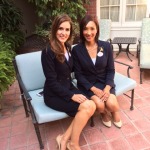 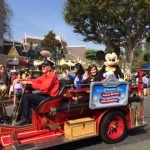 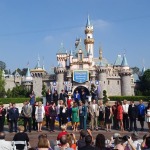 In fact, there are Ambassadors at every Disney Park around the world, yet still each one is charged with the same goals Walt originally gave Reihem –

“…to serve as official representatives of Walt Disney Parks and Resorts, interacting with Guests, Cast and the community in sharing the magic, inspiration and optimism of Disney destinations around the world.”

Each Ambassador serves a two-year term and with the announcement of the new members for 2015-2016, the current Ambassadors Sachiko White and Megan Navarette had to make way for their successors. “It’s all bittersweet,” Navarette said. White added “I just dove right in and I think you need to in order to get things done. I’m glad Sachi and I can hand it off to the next two who’ll finish the work we left and do even more magical things.” Nevertheless, White and Navarette know that the things they learned and the relationships they formed will continue to serve them and others as they move on to their new roles within the Company.

Finally with the release of white doves and a beautiful rendition of “A Dream is a Wish Your Heart Makes”, the new Ambassadors were announced. Jessica Bernard and Allie Kawamoto were selected among 60 applicants who were judged on their public speaking skills, knowledge of the Disney brand, and their ability to connect with people, which is really the heart of the program.

Surrounded by previous people who once had the opportunity to wear the ornate Ambassador pin, Bernard and Kawamoto will join their ranks as lifelong members of a highly regarded group that really becomes a lifelong role. Be thankful that there are people who will continue to bring the messages of hope and happiness that make Disneyland (and all their cast members) another memorable part of every visit.

Would you want to be a Disneyland Ambassador? What do you think the hardest part of being one would be? What would you do in that position of leadership? Tell us in the comments!