Lights, cameras, celebrities, and screaming fans! Those are generally the four components that have always been involved in movie premieres, especially for Disney. However, there’s a certain aspect that seems to have changed throughout the years ever since Walt Disney’s very first movie premiere for Snow White and the Seven Dwarfs.

The premieres in the past consisted of extravagant attire from celebrities, creative entertainment and special involvement for the fans. These premieres were to be able to make fans feel part of it all and really engage them in throughout the entire experience.

Here are some of the main world premieres throughout Disney history.

On December 21, 1937, Snow White and the Seven Dwarfs premiered to a record-breaking audience at the Carthay Circle Theatre in Los Angeles. News clippings from the time quote theatre manager, Ray Ducerne, stating how, “advance ticket sales overtook every other picture ever booked at the theatre, resulting in a sold-out opening night.” Ticket sales were limited to four per person due to high demand. Thousands of fans that couldn’t score one of the $5 tickets gathered outside the theatre just to be a part of the historic event.

Opening night at the Carthay Circle Theatre was an incredible event. Crowds lined up around the block, and all of the floodlights illuminated the area. Every star and executive in the Hollywood industry attended the premiere to pay tribute to the genius of Walt Disney. Thousands of fans were waiting to catch even a glimpse of the stars. There was even an animation exhibit and a mini replica of the Dwarfs village for all who attended to enjoy! 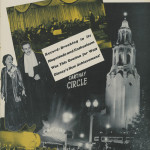 News clipping from the premiere. 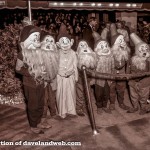 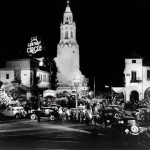 Carthay Circle the night of the premiere. 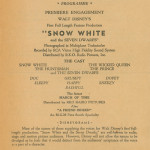 Another one of Disney’s biggest movie premieres was for Mary Poppins on August 27, 1964 at the Chinese Theatre in Hollywood. The premiere was even broadcast live on television and radio in the Los Angeles area so the fans at home could be part of the magic.

The premiere even provided a full hour of entertainment for the fans that weren’t lucky enough to score a ticket. They were greeted by everyone who walked down the red carpet, got to meet characters from other Disney movies, and participated in exclusive interviews with the stars. However, the cherry on top for the night was the special surprise Walt had for the fans. Before walking in the theatre, Walt introduced a live-size replica of a toy train in the street that was brought out by all of the Disney characters. The characters uncovered the train and thousands of balloons were released into the sky to celebrate the premiere. What a supercalifragilisticexpialidocious alternative ending instead of the traditional fireworks! 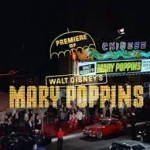 It was a jolly holiday in Hollywood! 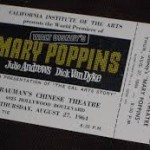 Ticket to the premiere. 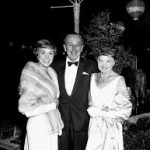 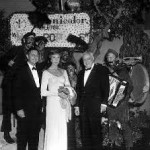 Julie Andrews and executives from Technicolor.

Even though the premiere for Snow White and the Seven Dwarfs was the most important movie premiere for Disney, Pocahontas takes the award for being the biggest one. The Walt Disney Company created an outdoor theater on the Great Lawn in New York Central Park for thousands of fans to watch the new movie.

The majority of the tickets to the event had been given away for free in advance in a random lottery to those who responded to newspaper advertisements. Disney officials even handed out some tickets the day of the event to people who showed up at the park. Tickets were given to help create crowd control and resulted in 100,000 people attending the event.

The crowd was sitting on 120,000 square feet of artificial turf in the middle of Central Park under a sky illuminated by 56,000 watts of light instead of stars. According to Projects of Interest, they were all prepared to watch the biggest movie premiere in history on four 80-foot-high screens with an 80-piece orchestra. Showing the film required enough electricity to power the World Trade Center. At least 40 miles of cable were spread around the turf, and eight projectors were used for nearly 16 miles of film.

Last but not least, they had to end the night the Disney way, with a fireworks show, to complete this magical experience. 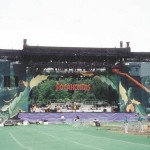 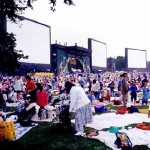 Families preparing for the premiere. 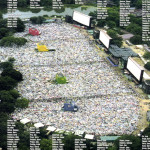 The audience for the premiere. 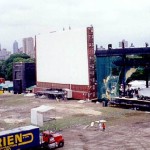 Wide screens for the film.

These three world premieres are only some of Disney’s great work for creating a grand experience for the fans. Recent world premieres seem to have become more exclusive than they were in the past. Generally, movie premieres now are limited to celebrities, employees, special guests and even lucky winners. At least fans are still welcomed to wait along the rails beside the red carpet and cheer for the celebrities! 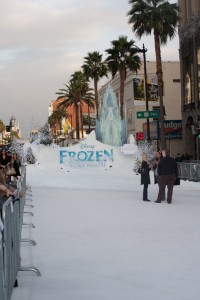 White carpet for the “Frozen” premiere. via Rotoscopers

If you couldn’t make it to a world premiere now, at least the power of social media helps a lot! Fans, celebrities or the paparazzi are constantly posting updates during premieres to make it feel like you’re there experiencing with them.

For instance, our team attended the Big Hero 6 premiere last fall. We were invited by The Walt Disney Studios to cover the event. The attendees consisted of celebrities, VIP’s and the media – Baymax even attended his own premiere, but he watched everyone from the top of Kimmel Studios! There was even a view of San Fransokyo’s skyline and bridge. The fans got to witness the entertainment from behind the rails while the invited guests got to walk through San Fransokyo.

Another premiere we attended was for Disneynature’s Monkey Kingdom at the Pacific Theater in The Grove. This premiere was smaller than the others, but was also attended by celebrities and other special guests who brought along their families. Everyone got to partake in EMA’s Sustainable Earth Month Celebration after the screening. 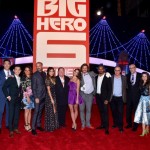 The cast of Big Hero 6 at the movie’s premiere. 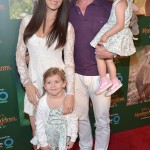 Ian Ziering and his family at the Monkey Kingdom premiere. 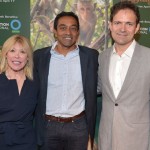