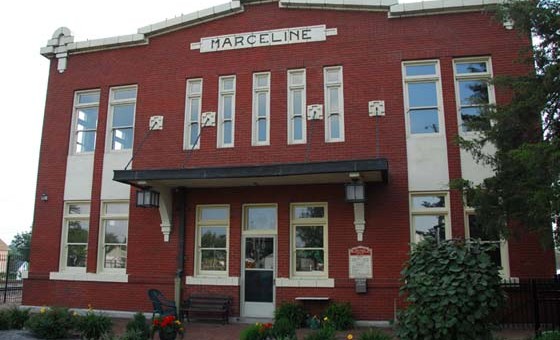 At the D23 Expo, people were able to suggest story ideas to DisneyExaminer. There were 2 winners selected to have their story suggestion written as well as winning an additional prize. Though we could not give prizes to all the stories because there were so many good story ideas, we decided to write more. This one was suggested by Stephanie Jackson.

When you want to take your love of Disney past theme parks, there are many places you can visit no matter where you live! Any trip can become a Disney trip if you try hard enough. Whether you live near any of the locations or are planning a trip to California, Chicago, Missouri, or London, you can always find a little bit of magic.

While many believe Marceline, Missouri to be the birthplace of Walt and Roy Disney, the title belongs to Hermosa, Chicago. The working-class neighborhood that was home to Walt Disney until he was 4, was recently purchased by a Californian couple that aims to turn it into a museum. The home where Walt Disney was born was built by Elias Disney, Walt’s father. Walt was born in a bedroom on the second floor. The new owners hoped it would be a sign of hope for others as a symbol of the American dream. As of now, it seems as though it will be a museum and childhood creativity center. Keep a look out for updates for a future visit to check out Disney’s humble beginnings!

It is said that Walt Disney arrived in Marceline on a train and later made his return on a train. So it was only fitting that the train depot be transformed into the museum in his honor. The museum features Disney family personal possessions. In August 2015, they announced plans to rebuild the historic Midget Autopia in downtown Marceline. The ride was donated by Roy and Walt in 1966. It is the only ride to leave Disneyland and be operated outside of the theme park. The ride was later removed to make way for “It’s A Small World”. The whole town has different locations for fans to visit including the old family farm.

"the moment you doubt whether you can fly, you cease forever to be able to do it" – J.M.BARRIE #PeterPan #JMBarrie #PeterPanStatue #KensingtonGardens #Kensington #LDN #LancasterGate #KensingtonPalace #Books #Quote

For the lost boy or girl inside all of you, you can visit the Peter Pan statue. The statue was erected in 1912. The creatorof Peter Pan, J.M. Barrie commissioned Sir George Frampton to create the statue. Though it may not be Neverland, as you can see below, with a little bit of pixie dust it, it can be almost as magical.

The Tam O'Shanter was a restaurant that Walt Disney often ate at. It was and still is a few miles away from the Walt Disney Studios in Burbank California. Glad I had the privilege to visit this place. #fd101look #mariesdisneyside #capturingdisneylandss

In Burbank, near Disney Studios, Disney often visited  Tam O’Shanter Inn, a local Scottish pub. The picturesque restaurant was designed by Harry Oliver. The Inn has been open since June 1922. Fans can still visit the restaurant and sit where Disney used to dine at Table 31.

We couldn't go on vacation and not do at least one thing Disney… ? #disney #disneyfamilymuseum #dfm #sanfrancisco

The Disney Family Museum was created by Walt’s daughter, Diane. It was owned and operated by the Walt Disney Family Foundation before it became a non-profit organization. The non-profit is called The Walt Disney Family Organization, Inc. The museum focuses on displaying Disney’s legacy. Until December 7, 2015 there is a special exhibit curated by Brad Bird called “Tomorrowland: Walt’s Vision for Today” that pieces together Walt’s view of tomorrow.

If you feel compelled to do so, you can  visit Walter Elias Disney at Forest Lawn Cemetery. While it may not be at the top of the list for most people, the final resting place has been a location for fans to pay their respects to the innovative creator that built a beloved empire. If you do decide to visit, make sure to research the location of his tomb before arriving.

Perhaps you are drawn to Disney because it’s magical or inspiring or because of the nostalgia it awakens. The Disney brand lends itself to dreamers, hopers, and believers. As Walt said, “Laughter is timeless, Imagination has no age, dreams are forever.” So next time you need a reminder of those things, or want a walk down memory lane, check out one of these locations.