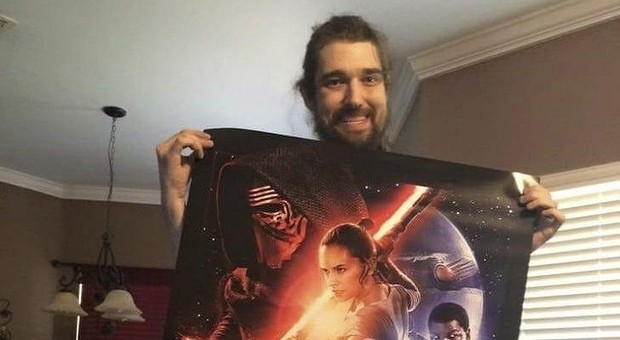 Daniel Fleetwood, 32, was diagnosed with a terminal illness and was given a couple of months to live. Fleetwood has been a huge Star Wars fan since he was eight-years-old and was worried he wouldn’t make it to see the official release of Star Wars: The Force Awakens later this year. According to NBC News Houston, his wish was to be given the chance to see it early.

#forcefordaniel help my man get his last wish, to see a screening of Star Wars before cancer takes him. @bad_robot pic.twitter.com/XCuYD0KlpY

Ashley Fleetwood, his partner, started the hashtag, #ForceForDaniel, to create awareness and convince Disney and Lucasfilm to give him one last opportunity of a lifetime. The post eventually ended up on reddit and other social media networks and just this past week, The Force Awakens actors Mark Hamill, John Boyega, and Daisy Ridley supported the campaign with tweets and retweets that helped receive more attention.

I just read this and am elated for Daniel & his family! Thanks to the powers-that-be for making his dream come true. https://t.co/ImiAdyBxf8

Today, Daniel’s wish came true. After countless perseverance and momentum from his wife’s social media campaign, J.J. Abrams called Daniel letting him know his wish is coming true. He got to watch an unedited version of the film in the comfort of his own home. He couldn’t say anything about it, of course.

Ashley posted on Facebook after Daniel watched the film, showing her gratitude towards everyone helping making her partner’s wish come true.

To all our wonderful supporters, friends, family and awesome strangers: Daniel‘s final dream was just granted!!! Today the wonderful Disney and Lucasfilm made his final dream come true, in the amazing typical Disney way, they really do make dreams come true!

Daniel just finished watching an unedited version of Star Wars: The Force Awakens!!! We would like to thank the awesomely talented JJ Abrams for calling us yesterday to tell us Daniel was getting his wish granted! We also would like to thank Lynne, Ben and Anahuac for coming to our home and screening the movie for Daniel. Lastly I want to thank ALL the amazing people who helped make this happen, thank you beyond words!!! May the force be with you all smile emoticon‪#‎forcefordaniel‬!!!

It’s not the first time Abrams has been able to grant a fan a wish like this. In 2013, another “Daniel”, Daniel Craft, terminally ill man, wanted to see Star Trek Into Darkness before it was released. Abrams also granted that wish as well.

What a gesture for a deserving Jedi. We wish Daniel and his family all the best through this difficult time. May the Force be with you, Daniel!

UPDATE 11/10: Daniel Fleetwood passed away this morning in his sleep. Our condolences to Ashley and the rest of his family.