This review is written by our good friend Tony Sherg, who can be found sharing more about film on the Reel Talk podcast. Thanks for sharing your thoughts, Tony!

Before the magic and wonder of Pixar’s “The Good Dinosaur” begins, audience members will be exposed to a profound and powerful message in “Sanjay’s Super Team”. The new short breaks new ground not only in animation but with the deep connection it has to its director, Sanjay Patel. In fact, the short is based of Patel’s real life relationship with his father and his disconnection with the faith he was raised to practice. The idea that this concept made it through the never ending maze of film production gives me hope about studios celebrating more diverse cultures and sensitive subjects on the big screen. 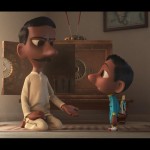 In a very simple setting we meet Sanjay, a young, wide eyed Indian boy who is entirely enveloped in the world of his 2D animated idols, known as the “Super Team”, a group of super heroes that live in the digital realm of make believe. A mere 10 feet away is Sanjay’s father, dedicated to his religious beliefs and practice. He attempts to connect his son without the means of digital media through the ritual of prayer.

However, Sanjay is an avid day dreamer and is immediately immersed in the comic-book style world conjured up from both him and his father’s passions. In this day dream, Sanjay unknowingly finds a way to connect to his religious heritage, through the stories and core values that describe his own personal idols. 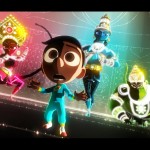 The symbolic representation of the modern generation gap has never been so clearly explored on the big screen. A generation raised on technology, groomed to believe that the world is in need of constant saving, is the topic of discussion and Pixar’s brilliant team of writers and animators have successfully made it something people from all cultures and religions can connect with.