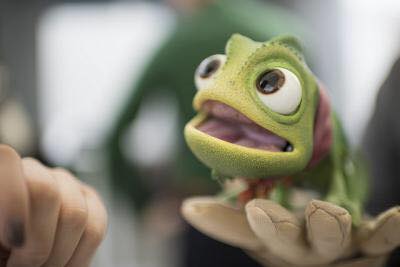 This past Saturday, attendees of this year’s SXSW Festival in Austin, Texas who made their way to JW Marriott downtown were treated to a unique presentation by Disney.

SXSW is known as the festival that explores the area between culture and technology and obviously the Mouse House is a player in that space with everything from movies to theme parks. Specifically, the Disney execs wanted to share what might the future of how artificial intelligence (AI) might further their theme park attractions.

“I think AI and machine learning is going to be very important for what we do,” said Jon Snoddy, who serves as Senior Vice President for Research and Development at Walt Disney Imagineering at the presentation. “Things like characters that can move around among our guests. They’re going to need to understand where they’re going, have goals, and they’re going to have to know how to navigate in a world with humans. All these emerging technologies are going to be key to the next generation of entertainment.”

During the presentation, Snoddy shared a sneak peek of a “secret” Imagineering project that was an example of what that future might look like. It was an Audio-Animatronic of Pascal, the pet chameleon of Rapunzel from “Tangled”. Like most of Disney’s robotic figures, he looked incredibly lifelike. Unlike the other figures, however, he reacted to his surroundings.

Much of the excitement that has come for the upcoming opening of Pandora – The World of Avatar at Disney Animal Kingdom Park in Florida has been because of this Audio-Animatronic of a character from the movie. The lifelike nature of the figure and reactions she gave are pretty convincing and captivating.

Imagine now the same figure carrying a conversation with you in the park. And we’re not just talking about asking where the bathrooms are either. Let that sink in.

While AI and machine learning are still in its infancy, the ability to have figures like Pascal and this Na’vi in theme parks might be here quicker than we think. Beyond that, we could even see the same technology used in consumer products for our home or office. Who says you can’t have Pascal help make you better decisions on what to eat or even who you should love?

With the incredibly vast amount of resources and incredible talent at Disney, that dream might come true very soon!