With the release of “Spider-Man: Homecoming” this past weekend, there is once again a renewed interest in everything Spidey, including toys. But the toy that we received from our friends at Sphero has probably set the bar for one of the smartest Spider-Man toys on the market today.

Sphero’s Spider-Man is at its core another “connected toy,” meaning that it’s smart because it gains much of its functionality through an app on a smartphone or tablet. Toys like Ultimate Lightning McQueen and BB-8 were great examples of the company’s product line, showing off their ability to create toys that create some amazing moments for kids and kids-at-heart.

Those Disney-branded toys, however, had many of those moments come from some type of kinetic action e.g. a moving car and a rolling orb. With the company’s first delving into using Marvel IP, their Spider-Man reverses that notion and puts the ability to create those moments in the user’s hands – literally.

Through a combination of artificial intelligence, smart sensors, and an activity-filled app, Spider-Man really becomes that friendly neighborhood sidekick.

Sphero’s Spidey connected toy doesn’t move at all, aside from the emotive eyes courtesy two LED panels. Everything else he does requires your direct involvement. After a quick charge and pairing it to your app-enabled smart device, he comes to life with dialogue that encourages you to participate.

“Hey there, Incredible Dude!,” he said to me when we first started playing with our review unit (“Incredible Dude” was the alias that I selected during the initial set up and pairing). “What do you want to do now? How about we go on a mission?”

After talking to Spidey about doing that mission, he then invited me to swing along with him through New York City. The sound effects of that swinging began to play and I quickly found out that Spidey wanted me to play along. So that’s what I did!

“Oh, look out! Venom is coming. Quick! Use your super power that you learned earlier!,” he told me as I jumped around a living room while holding Spidey in one hand. That super power was a “sticky stomp” that I “learned” during the initial set up and pairing, too.

So I stomped and Spidey, who I still had in hand, was quick to accompany my actions with the appropriate sound effects and even give me other actions I should do to fight off the villain.

After defeating Venom, Spidey thought it was time for a quick break, to which he then revealed that he had another “super power” he was capable of doing – listening to me! With the quick two pushes of the Spider-Man emblem on his chest, I asked him random things like “What time is it?” or “What else can we do?” His replies were hit or miss as he isn’t Siri or Alexa in being virtual assistants. He’s a toy! 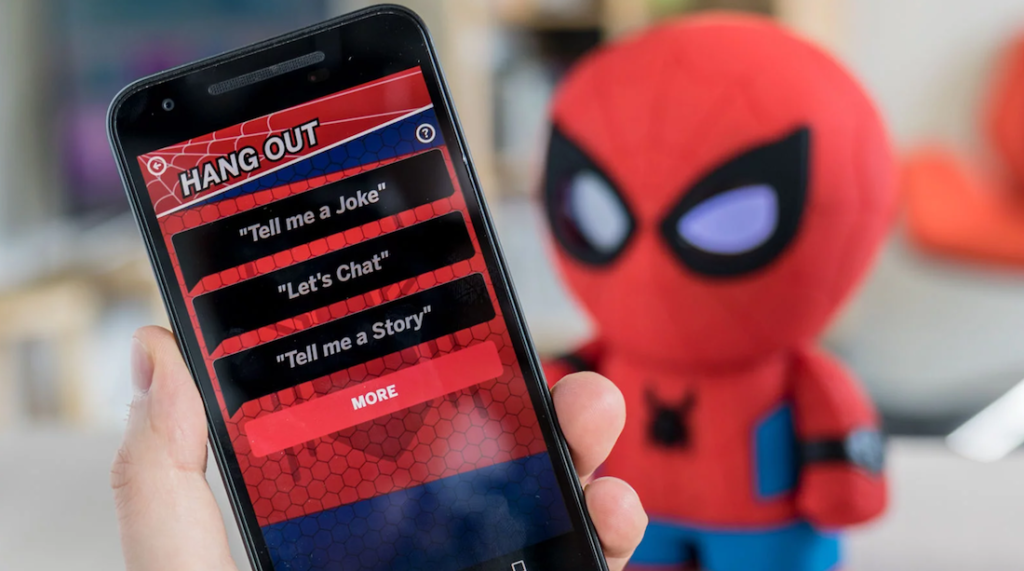 With the help of the connected app, Spider-Man had even more features like joke telling, “Guard Mode,” and even the ability to be an alarm clock.

If it sounds like this toy was made for kids, you’re absolutely right. Sphero’s Spider-Man is probably its most kid-friendly toy they’ve ever made. All their other toys including Lightning McQueen, BB-8, and even their first smart “orb” had some type of learning curve that could only be learned by a 12-year-old or older. Even those toys created some fear of being easy to break.

Spider-Man lowered that curve to next to nothing, having the toy, which is made from a very durable and lasting basketball-like rubber, be entertaining with simply your voice and your actions. In having the role-playing element and ability to only answer simple questions, the toy was very much created for younger kids.

But if you saw me play around with Spidey and go on missions and ask him questions during my review time, you’d be pretty surprised to see how much I was into it all. While I’m not a parent, I can see how parents and their young kids could get stuck in the web of this incredibly smart Peter Parker… and Sphero toy.

You can get Sphero’s Spider-Man right now for $149.99 on Sphero’s website now.

Our thanks to our friends at Sphero for providing us with a review unit for this piece!