I vividly remember at the last D23 Expo during the live-action Walt Disney Studios presentation when they showed the opening sequence of the live-action version of “The Lion King.” Director Jon Favreau debuted the clip for the first time which was basically their version of the iconic opening of the animated film with the sunrise over the African savanna.

The four-minute sequence got applause and cheers that seemed to equate with when the cast of Avengers came out on stage later on in the presentation. It was that loud and the energy was memorable.

It was clear to me that this was something that people wanted to see. But I never understood why until I saw the full movie just a few years later.

Like Disney’s live-action “The Jungle Book” by the same director, Favreau’s “The Lion King” is not really “live-action” with actors in motion-capture suits playing out the movie with digital costumes and environments. Instead, it’s more of an animated film, with much (if not all) of the film is digitally created to look real.

This photo-realistic look in having animals look like animals you’d actually see on an African savanna was basically the look filmmakers wanted to have. 2019’s Lion King feels more like a nature documentary you’d find on National Geographic than it is an animated film, which in turn has its drawbacks.

Part of what makes animated films so much fun is that they don’t look real. They bring you out of your reality so that you can embrace and live in another. 1994’s Lion King falls into that category because animals can’t speak words for one and more importantly, can’t transmit emotion through body language like humans can.

I did miss feeling the emotion of the anthropomorphic versions of Simba, Nala, Scar, and Mufasa in this new version of the story, I did enjoy gawking at how amazing visual effects technology has progressed.

Everything (expect for one shot) had been digitally sketched, layered, and colored to create something that to your eye was something shot by a real camera. While there were points in the film that the effects were too much and became a distraction, it looked amazing and only grounded the reality and story even more. 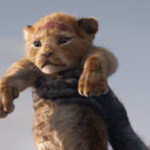 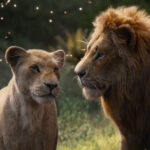 As for the story, there aren’t any changes that were made to the one you’ve experienced back in 1994 and the stage musical you saw in 1997. It basically is a shot-for-shot remake of the animated film, even taking visual cues from it and re-creating it entirely in that digital photo-real look (with some examples you’ve probably seen in the trailers).

There are new things that Favreau and team added to their version, including the cast and music. The cast is a list of top A-list predominantly black celebrities including Donald Glover as Simba, Beyonce Knowles-Carter as Nala, Chiwetel Ejiofor as Scar, and the original voice of Mufasa, James Earl Jones. In keeping with having black talent front-and-center this time around are the music team contributors like Pharrell Williams and Chance The Rapper partnering with the original music team of Elton John, Tim Rice, and Hans Zimmer to create a few new songs, while re-recording the iconic score.

It’s this blending of the old with the new that makes this a tricky film to really give solid thoughts on. Not much has changed when it comes to a lot of what has made “The Lion King” a beloved Disney property for generations.

So if you like visual effects, animal documentaries, and moving melodies, then you’re in for a treat. If not, you’ll probably be like the critics who contributed to the 60% fresh rating (as of this writing) of the film on Rotten Tomatoes wanting more new and less old.