Jake Bazel was invited by Broadway producer Jonathan Rockefeller to become a story consultant on what would be Disney’s first officially sanctioned stage musical featuring Winnie the Pooh.

“Jonathan knew I was the biggest fan of Pooh, so I was honored to be a part of something so special to everyone, but extra special to me,” Bazel said.

But like many things that Pooh and his friends represent, dealing with life change is great among them.

Disney’s Winnie the Pooh: The New Musical Stage Adaptation was supposed to open off-Broadway in 2020, but COVID changed all that fast.

According to Bazel, that extra time allowed for deeper reflection on what this show could be. “Disney Theatrical allowed us to experiment and play along with the story so we could include most of the things that people love about Pooh, as well as tell a new story in the Hundred Acre Wood.”

One of those experiments was even having Bazel read for the part of Pooh himself. He tested so well that he ended up being cast in the role, alongside Chris Palmeri who plays Pooh’s sidekick Tigger in the musical.

All the acting in the musical isn’t done just with actors, however. Both Bazel and Palmeri perform their characters with puppets that they operate live on-stage. Both of them have puppeting backgrounds, but there was a uniqueness to these ones.

“They are quite large,” Palmeri said. “And that surprises people. But it’s also unique in that we are performing alongside these puppets as well which I think adds a level of depth.” Palmeri and company don’t hide behind the puppets as we’ve seen with things like the Muppets. Instead, they operate them right behind the puppets themselves (e.g. Olaf in the Frozen stage musical), allowing them to share even more emotional and physical aspects of acting that you cannot get with a puppet alone. 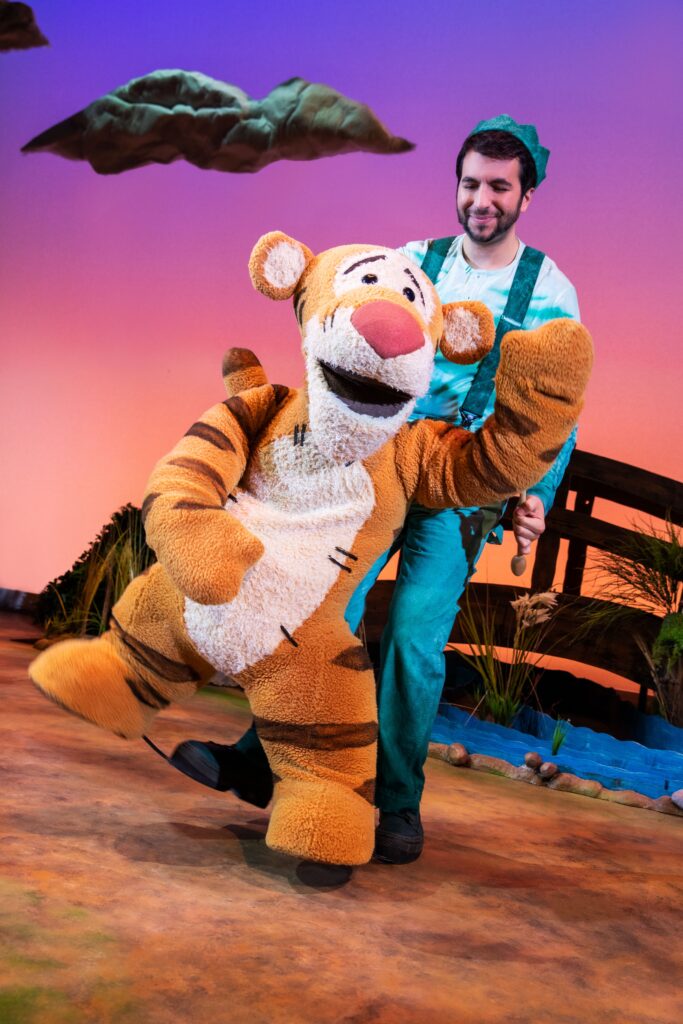 Chris Palmeri puppeting Tigger in the new Winnie the Pooh musical by Disney. (Photo by Evan Zimmerman for MurphyMade)

Part of their job, too, is to bring the character to life through their voices. But voicing some of the most iconic characters in the world also means you have to live up to the original voices that made them famous.

Bazel said, “They are iconic, and both Chris (Palmeri) and I worked very hard to make sure we got not just intonation down, but what they would say as characters off-script as well.” Palmeri added, “We’ve done it so many times now that it’s less of an impression and more just second-nature. We’re slowly becoming Tigger and Pooh.”

And emotional is something both Palmeri, Bazel, and company hoped to capture and express in the show. “Especially after COVID,” Bazel said. “Especially,” echoed Palmeri.

The show has already entered previews, and the audience’s reactions have not been unfounded. “People are crying and smiling and laughing,” Palmeri said. “It’s something that is bringing comfort to people, 95 years after they first entered our world.”

Added Bazel, “I think after last year’s COVID pandemic and the rest of the world’s troubles that came with 2020, I think we all just need a big hug. Pooh, like always, is our big hug for this moment.”

Tickets and more information can be found on the official website.

Special thanks to Jake Bazel and Chris Palmeri for contributing to this story!