If you’ve noticed that many of your favorite shows are coming to its season end already, that’s because TV networks are technically on a “break” this summer. Before they take their break, however, TV networks want to be able to tease their lineup for the next season.

That’s why this week, those networks gathered mostly in New York City to showcase their 2016-2017 in what the industry calls “Upfront” events. The name gives the purpose for the events, to share the shows in advance so that marketers and advertisers can buy commercial air time “up front” before the shows air, giving the networks early cash.

The Disney-owned ABC Network just concluded their Upfront presentation a few hours ago and while the business is just beginning to happen, your business of what to watch on ABC later this year and next is your business now. 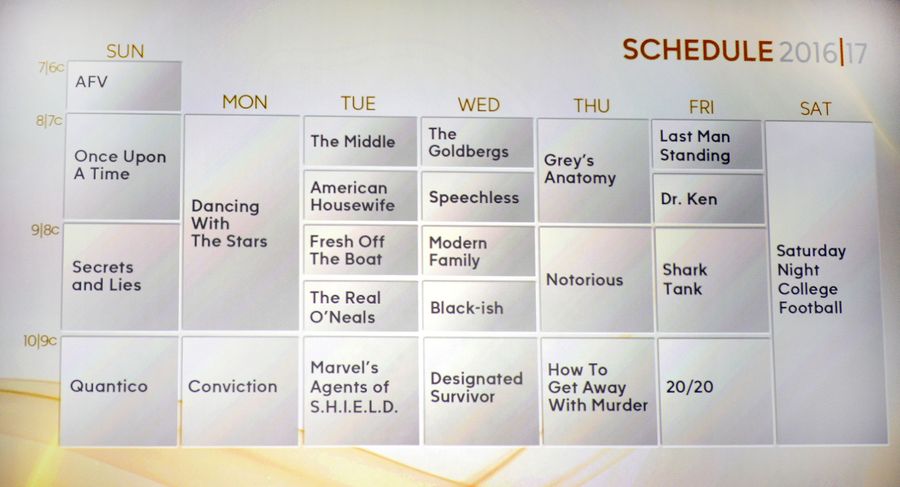 Many while many shows were cancelled last week, many of them like Modern Family, Scandal, Marvel’s Agents of S.H.I.E.L.D. will return, and the special shows like the Oscars and a remake of Dirty Dancing will make their debut. In their place, ABC along with their newest entertainment president believe they have new shows that will still make them your place for prime TV programming.

Katie Otto (Katy Mixon), a confident, unapologetic wife and mother of three, raises her flawed family in the wealthy town of Westport, Connecticut, filled with “perfect” mommies and their “perfect” offspring.

Maya DiMeo (Minnie Driver) is a mom on a mission who will do anything for her husband, Jimmy, and kids Ray, Dylan, and JJ, her eldest son with special needs. As Maya fights injustices both real and imagined, the family works to make a new home for themselves and searches for just the right person to give JJ his “voice.”

Lawyer and former First Daughter Hayes Morrison (Hayley Atwell) is about to accept a job offered from her sexy nemesis, NY District Attorney Wayne Wallis, to avoid jail time for cocaine possession and avoid hurting her mother’s Senate campaign. Working with his team at the new Conviction Integrity Unit will let her use her brilliant mind to turn over cases, where there is credible suspicion of wrongful conviction, and give her a chance to turn things around with her high-powered political family.

Kiefer Sutherland returns to primetime in a conspiracy thriller as Tom Kirkman, a lower-level cabinet member who unexpectedly becomes president after a devastating attack on Washington. He will struggle to prevent the country and his own family from falling into chaos, as he is thrust into one of the most difficult presidencies in history.

**The following shows will make a mid-season premiere in 2017**

“Still Star-Crossed,” a period drama from Shondaland, picks up where the famous story of Romeo and Juliet ends, charting the treachery, palace intrigue and ill-fated romances of the Montagues and Capulets in the wake of the young lovers’ tragic fate. The series is based on the book by Melinda Taub.

Based on the novel and movie “Time After Time,” executive producer/writer Kevin Williamson delivers a fantastical cat and mouse adventure through time when famed science fiction writer H.G. Wells is transported to modern day Manhattan in pursuit of Jack the Ripper. Once H.G. arrives in New York City, he finds a world he never thought possible and a young woman who captivates him.

Based on the web series, “Downward Dog” is about a struggling millennial, Nan (Allison Tolman), from the point of view of her lonely and philosophical dog, Martin. One session at obedience school already makes them realize that even at their worst they may be the best thing for each other.

The series stars Allison Tolman as Nan, Lucas Neff as Jason, Kirby Howell-Baptiste as Jenn, Barry Rothbart as Kevin and Mo Collins as Kim. Samm Hodges is the voice of Martin.

Alice (Jenna Elfman) is a fiercely independent career woman whose life is turned upside-down when she meets the love of her life – a divorced father with three kids. This triggers even more upheaval when the slightly unhinged imaginary friend she created as a child suddenly reappears to help her navigate the transition from single girl to a woman ready for a family.

Will you be tuning in to ABC because of any of these new shows? Tweet us your favorites!