I was always intrigued by the idea of these “Star Wars Story” films. The leadership teams at Disney and Lucasfilm promised two things, essentially: expand on things we didn’t know about Star Wars things and   engage those who aren’t into “Star Wars” in general.

Personally, I think it’s a grand challenge to meet both of those goals because they are extremely opposed to one another. “Solo: A Star Wars Story” was going to be another test (with the first test being the success of “Rogue One”) if Lucasfilm could succeed in serving long-time Star Wars fans, as well as engaging others to love the saga for the first time.

These were the eyes I was using in approaching this film that would tell how Han Solo, one of the most beloved characters in the Star Wars universe, became who he was. That said, logic would state that you would need to know who Han Solo and everything he was prior to watching this film. My eyes immediately started to judge things when Alden Ehrenreich was cast as Han.

Then came the controversy regarding the film’s directors changing last-minute. “The LEGO Movie” directors Phil Lord and Chris Miller were selected by Lucasfilm president Kathleen Kennedy to helm the film, but were later dismissed after creative differences. It was only a little less than a year before the film was due to release and director Ron Howard was chosen to complete the film.

What were those creative differences? I really liked “The LEGO Movie” and think it might have blended well with a Star Wars twist. Would Ron Howard change everything originally planned that got greenlit in the first place?

All these things were my eyes when I stepped into the movie theater in Burbank last week to screen the film early. I was hesitant and worried that this might be the first Star Wars standalone film (apart from The Last Jedi) that I would very much dislike.

But I was happily mistaken.

I actually left that theater really happy and entertained. My worries gave way to that of surprise and delight because the promises that this Star Wars Story gave were met.

For fans of the character that is Han Solo and veteran Star Wars film enthusiasts, I was delighted to see how many references they included to the past films that were regarding Han exclusively. They also weren’t too in-your-face to the point where you’d be turned off by them, and Alden Ehrenreich captured the spirit of Han without having to be Harrison Ford.

Beyond anything else, though, the success is mostly due in large part to writer Lawrence Kasdan, who knew Han inside and out.

Kasdan wrote “Empire Strikes Back” and “Return of the Jedi,” both films where Han had some of his memorable moments play out and where his most memorable sayings and mannerisms were shared. To be able to circle back nearly 30 years later and give an authentic and believable origin to them is no easy feat, but Kasdan (with help of his son Jon, a co-writer) did it very well. Their efforts will serve the fans very well in this exciting new narrative to the Han Solo story.

Just because the film will speak a lot to the fan through the references doesn’t mean that new audiences will feel alienated, however. To the credit of Kasdan and director Ron Howard, they seemed to have turned the origin story on its head and made an exciting and narrative film that felt like it came before the original Skywalker Saga films where we first met Han in the 1970s.

Most of the other critics that I spoke with after seeing the film with me said that it was a “fun” movie. I couldn’t agree with that more. When you think of a summer popcorn flick, this is basically it because it’s accessible, epic, and engaging throughout. “Solo” does take a few minutes into its first scenes to establish itself as a Star Wars movie, but you’re treated to a blend of a western film, space opera, and sci-fi adventure that made us all love Star Wars in the first place.

At its core, it’s the fun and compelling story that people should look forward to it – Star Wars encyclopedic fan or not. If you are the fan who knows everything about everything in the ‘Galaxy far, far away’, you’ll get the bonus points of feeling that catharsis of fandom come full-circle. If you’re not a fan of Star Wars, you’ll probably become a novice one after seeing “Solo.” Just do yourself a favor and read up on those references that the fans know, though. It would only make you love the movie more.

P.S. Lando/Donald Glover’s performance merit their own Star Wars Story film. That is all.

Read our global press conference story with insights from the cast and filmmakers HERE. 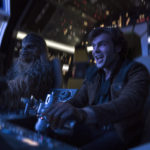 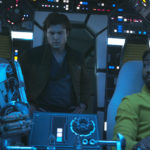