I recall walking to my seats for the “Beauty and the Beast” orchestra concert at the Hollywood Bowl not too long ago.

Before the concert started, we were treated to an orchestra of voices serenading the audience with contemporary a cappella version of our favorite Disney songs. From performing classics like “I Wanna Be Like You” to modern tunes using a looping system like “Immortals” from ‘Big Hero 6’, there was no question that this group was very talented – and clearly created by Disney.

The group was named DCappella (with the “D” being the same “Waltograph” font that Disney uses for most everything they own) and used the iconic Hollywood Bowl stage to make their public debut. Since then, they have appeared on ABC’s “American Idol,” Disney Channel, and at Disney Parks’ special events. Having just debuted, how could such a group get to perform on these worldwide stages in front of millions online and offline so quickly?

Turning to history, when The Walt Disney Company starts new performance groups or heavily backs them, they have often invest their resources in young-aged groups like the Jonas Brothers, N’SYNC, and the Mickey Mouse Club. In other words, they’ve supported those talented performers with lesser experience in performing and age in hopes that their youthfulness would make them successful. DCappella was pretty much the opposite with most of their members between their early to late 20s and have performed in a variety of professional capacities before.

To find the initial members of the group, Disney held an online call for anyone to submit an audition video. In all, nearly 1,500 people worldwide audition submitted videos. After sifting through the auditions with filters like being a U.S. citizen and fitting an older adult age range, they sent callbacks to a handful of people on the East and West Coasts of the United States. Disney then flew their selected individuals to Los Angeles to meet as DCappella for the first time. 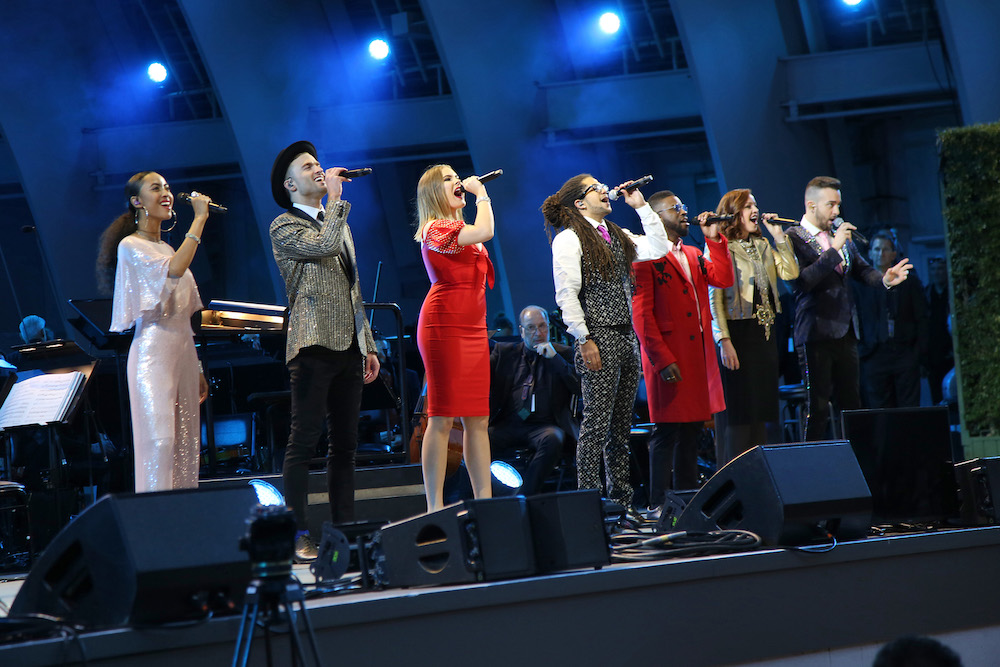 DCappella in their public debut performing at the Hollywood Bowl.

It wasn’t entirely an awkward meeting for the selected seven vocalists, however. Many of them had either worked together performing either as students in college or performing as cast members at a Disney Park. Since their early music days, all the vocalists have either went on to become professional musicians having been featured in movies like “Pitch Perfect” to performing in popular Broadway musicals like Disney’s “Newsies.”

All together, DCappella’s initial members have a combined 100 years experience amongst them. They include: Shelly (mezzo), Sojourner (alto), Morgan (soprano), Orlando (baritone), Antonio (vocal percussionist), Joe (bass), and RJ (tenor). I had caught up with them after a recent special performance they did for the kids and families at CHOC Hospital in Orange, CA.

The humble group of young artists was quick to answer a question about why they decided to take the time to perform at a children’s hospital. “It’s for us to make an impact,” Orlando said. “When we are given an opportunity like this, there’s something important and special about being in a position where you can directly influence and encourage someone. It reminds you of the responsibility as an artist.”

It’s very true that the group has already massed a large following on their social media accounts, where most of their fans are teens and young adults, many of which are a combination of Disney fans and a cappella music enthusiasts. “The timing of this group is perfect. There is a resurgence of a cappella music happening now,” said Sojourner. Shelley quickly added, “We exclusively get to use the Disney songs and reimagine them for today’s audience. At the same time, we honor these songs with the best of our abilities.”

Helping the group create those new twists on Disney classics is Deke Sharon. Sharon, who is widely considered to be the father of contemporary a cappella music, has written and arranged vocal music for TV shows like NBC’s “The Sing-Off” and all the “Pitch Perfect” films. He has even had a connection for Disney having started a cappella groups for the company at its theme parks in early 2000. For him, his ‘dream come true’ moment had to do with Disney.

“My favorite movie when I was a child was ‘Fantasia’, he said. “I loved that they brought together different medias together to create an all-around experience that was unlike anything before.”Sharon went on to say that he had an idea for many years that the next step for a cappella would be to have a large stage show that incorporated the music form with the latest technology, similar to that of ‘Fantasia.’ It wasn’t until 2016 when Sharon was working on a musical that he got stuck in a hotel due to a blizzard with Disney Music Group’s head of AR and head of marketing that he decided to make use of the time.

He continued, “We had the longest conversation and one of them told me that they had an interest in creating an a cappella group, but the right opportunity never came up. It all clicked for me then and there.” He gave an elevator pitch of his idea then and there and Disney immediately started to make things happen using their grand resources.

Today, DCappella is ready to go on a multi-state tour and continues to release their own versions of Disney music. In a lot of ways, they have quickly become part of the overall synergy that Disney is known for in being able to churn out product that reflects their current movies, TV shows, and more. When asked if that use of DCappella’s talents were a requirement for the group to be supported, Sharon disagreed.

“It has been a very artistic-centric operation. They all have been hands-off, which is something very rare for an industry like this,” he said.

Sharon has been the artistic core to the group behind-the-scenes, serving as the group’s artistic producer, which includes music directing and arranging for all the songs that group performs. He’ll also has a very big hand in producing the national tour that he and the team are currently preparing for.

While the tour experience is being kept pretty secret right now, some of DCappella and Sharon couldn’t contain their excitement and shared a few things to expect. “It will be a good time! We don’t want to share everything, but it will be a full-on performance experience in our element. We won’t just stand and sing. It will be very interactive.” “It will be a show for everyone, of all ages, and not just for Disney fans,” Joe added. Sharon said that his vision of creating a live experience to the one he was inspired by in ‘Fantasia’ will be pretty close to what he’s creating with the stage design, video, and music crews. “It’s going to be wild!,” he said.

It’s very much going to be a wild ride for DCappella moving forward, too. And yet the group remains committed to not forgetting the opportunity they’ve been given and the possibilities that will come with Disney by their side. “If this is the floor, what is the ceiling?,” Orlando said.

Our special thank to DCappella and Deke Sharon for contributing to this story! Learn more about DCappella and their tour by visiting their official website.