In a time of physical distancing, is it healthy to truly separate oneself from everyone and everything? This wasn’t a question that Pixar animator Madeline Sharafian was necessarily facing to answer when she was thinking about a Pixar short idea a few years ago, pre-pandemic.

s part of the SparkShorts program, Pixar’s internal ‘if-you-have-an-idea-go-make-it’ short film initiative, Sharafian found “the crack of an opportunity” open itself up and she ‘burrowed’ in.

“I had kept this idea from back in college (around 2014) that revolved around my childhood nickname,” said Sharafian. She was called “rabbit” and connected to it by their personality, her “big teeth,” and where they lived. “I was into the visual metaphor of bunnies’ burrows, the idea of being underground and isolated, as well as those spaces also being a point of connection.”

She continued, “I really struggle with isolation because I’m a perfectionist. I really don’t want anyone to see me until I can knock someone’s socks off, but as a human being I know I already knock people’s socks off!”

That predicament eventually led to the overall theme of the short, which was asking for help. And help she needed to ask for quickly.

Sharafian pitched the short, which got greenlit and production began. Being part of the SparkShorts program, the team and resources to create were significantly less compared to a feature animated film, but she ended up working with the choices of people she had on her list – while they also worked con-currently on their other projects.

The look and feel of “Burrow” were translated directly from the rawness of the emotional core of the theme, so Sharafian felt doing it in the style of the 2D childrens books-style would match up great. “I still wanted every scene to feel real and grounded, and I cannot think of a better art look to make it so,” she said. She also loved cutout visuals those books often had as well, focusing in on the detail as if the reader had to hunt for something – just like a rabbit.

As for the music, Sharafian opted for the use of classical music, specifically Mozart. “My dad used to play it all the time in my childhood home, and I didn’t really appreciate it until now.” She also said that the tone of classical music brought “gravitas” and a seriousness to their playful and crazy characters and overall mood of the short.

Overall, the short was created in six short months with a “happy and healthy team” that was not just put through the paces, but leaned on each other to make it happen as well.

“We were constantly touched by the help and expertise that everyone was willing to offer. So, you know, I guess asking for help is the right thing to do after all!,” said Sharafian.

“Burrow” can be seen exclusively on Disney+ on Christmas Day, December 25, 2020. 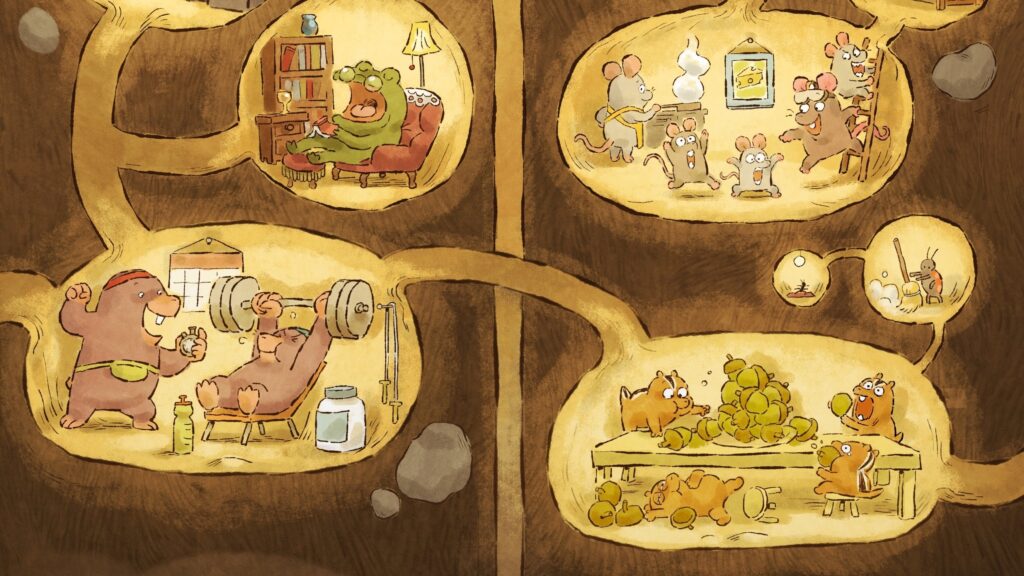 Our special thanks to Madeline Sharafian for the interview!