Tyrus Wong, born Wong Gaing Yoo, was born in Toisan, Guangdong Province, China in 1910. When his family decided to pursue a better life for Wong, he and his father left his mother and sister in China to leave for the United States, never to see them again.

Wong and his father traveled by boat to America. It was a less than ideal experience, but the two finally made it to California. Wong had always been interested in art and eventually entered in the Otis Art Institute on a scholarship, which catapulted him to the top of his class. From there, Wong went on to create iconic art pieces for both individuals collectors and public works. 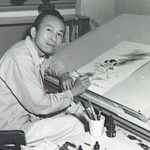 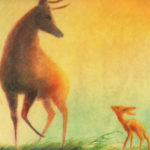 While there was marginalization against Asian-Americans, Wong’s work did not go unrecognized. During the Great Depression he worked in the Federal Arts Project during the Great Depression, which allowed him to create two paintings a month for public buildings. Wong was also unafraid to draw attention to his own work: for example he began the Oriental Artist Group of LA with artist Benji Okubo. They held exhibitions of their work across california, showing off works that combined eastern and western styles

Wong is perhaps most praised for his work in the movie industry. He began as an “in-betweener” at the Walt Disney Company, but when Walt Disney himself saw his concept art for the film “Bambi,” he changed the film’s tone entirely to match Wong’s vision. After Disney Wong also worked worked on pre-production art for many films at Warner Brothers, including “Rebel Without a Cause” and Sands of Iwo Jima.” Wong was recently approached by Disney to create art pieces for the “The Legend of Mulan,” but Wong refused, affirming that his time as an animator had finished.

Wong’s time as an artist, however, lasted till the end of his life. He has worked on all sorts of artistic ventures, including creating art for magazine covers and Hallmark card designs. His passion, however, was to create hand-made kites, which could often be seen flying over the skies of Santa Monica Pier. 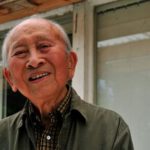 The New York Times points out that while Wong had a great impact on film and art, he was often looked over as an Asian-American, and is only now gaining recognition for his work. Despite past ignorance about Tyrus Wong, however, it’s clear that his life is still to be celebrated. He was named as a Disney Legend in 2001, joining the ranks of other great artists such as Ub Iwerks, Glen Keane, and Andreas Deja. In 2013, the Walt Disney Family Museum held “Water to Paper, Paint to Sky,” a retrospective focused solely on Wong’s work. This made it all the way across the country and was exhibited in the Museum of Chinese in America in Lower Manhattan in 2015. Most recently and most widespread, Wong’s life was captured in the 2015 “Tyrus”.

Tyrus Wong sadly passed away December 30th, 2016, just a few months after his 106th birthday. His life, however, continues to speak volumes about art and about the Asian-American experience, and it’s wonderful that artists and movie goers everywhere are now taking notice of this notable life.

Update: A previous version of this article stated that Wong passed away after his 100th birthday. This updated version reflects his true age at the time of his passing: 106 years old.