As mentioned in my preview of The Good Dinosaur, I had great expectations for the film, which promised near photo-realistic animation and heartfelt visual storytelling. After viewing this movie I can say that Pixar has delivered on those two fronts. On the press junket day we had the privilege of sitting with the filmmakers and voice actors of The Good Dinosaur to discuss their experiences, insights, and individual journeys into the making of this film.

The Good Dinosaur is a timeless coming-of-age story about an 11-year-old apatosaurus named Arlo who finds courage amidst his mounting fears. It’s also an innovative retelling of history–what if the asteroid never hit, and dinosaurs never became extinct? Separated from his farm and family, Arlo encounters an animal-like caveboy whom he names Spot. Together they navigate the unforgiving wilderness to find Arlo’s farm at Clawed-Tooth Mountain.

Arlo and Spot’s Epic Journey Into the Wild 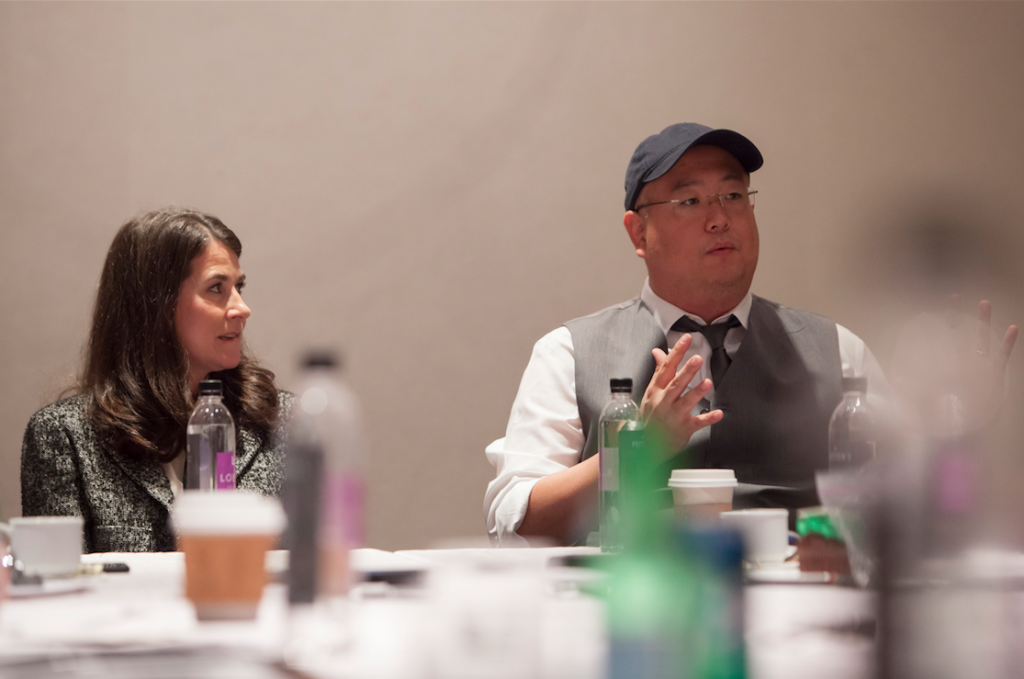 We didn’t want it to feel like a walk in the park. This world feels big–even to a dinosaur. -Peter Sohn, Director

In a film where the main characters are constantly navigating a wild terrain, the world itself becomes a prime character. Rising themes include survivalism in which nature itself becomes an antagonist. “Nature can overcome anything. Even a dinosaur,” Producer Denise Ream says.

In order to reflect the scale and magnitude of nature’s prowess, the animation of these landscapes needed to be near photo-realistic and immersive with slight stylization. To familiarize themselves with the world of the movie, filmmakers Sohn and Ream along with other members of their team, organized a trip to Wyoming to go horseback riding along Teton Range and rafting near Snake River. They also studied other areas of the American Northwest including the geysers and waterfalls of Yellowstone, the grasslands of Montana, and Wyoming’s Red Desert.

“Everywhere we went, there was a duality: something beautiful and dangerous at the same time–like landslides beneath sunsets,” said Sohn.

Sohn and Ream contribute the film’s realism to Sharon Calahan, director of photography-lighting and long-time landscape painter, who wanted the landscapes to evoke emotions and a sense of sincerity.

[Calahan] was so influential, because she’s brilliant in both sides of her brain,” says Sohn. “She’s creatively and artistically beautiful — I mean, logically, she is incredible as well and knew the physics breakdown and how things work.  So we would go out there.  And she’d tell you, “Look at the river.  You know why it’s this color?  The rocks underneath have a certain thing growing on them that reflects the light in a certain way, so you have to understand that. 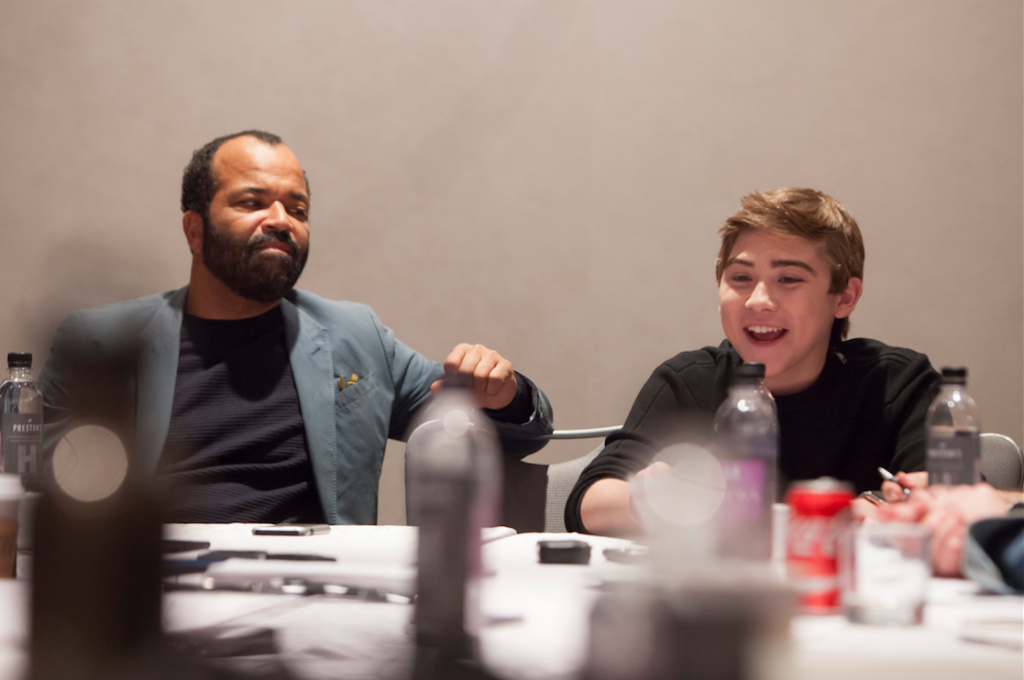 To Arlo, the wilderness was a place to fear. Bad things happen there. But the wilderness is actually where he transitions from being a little boy to becoming that mature, brave dinosaur he always wanted to be. -Raymond Ochoa, voice of Arlo

While there was a whole department responsible for creating the film’s volumetric clouds in order to create The Good Dinosaur’s realistic setting, capturing the characters’ personas and emotional development was also a challenge. Enter Raymond Ochoa and Jeffrey Wright, voice of Arlo and Poppa respectively.

One of the most important relationships in the film besides the unlikely friendship between Arlo and Spot is that between Arlo and his Poppa. In a very significant scene in the movie, Poppa dips his foot in mud and marks a stone, leaving his footprint. He urges Arlo, his brother Buck,  and his sister Libby to make their mark by coming into their own and contributing to the farm. However, Arlo was the last to hatch among his siblings and is struggling to meet his father’s expectations of him.

Wright mentioned that he drew most of his relation to his character from his own relationship to his son and daughter.

“It’s really the central question of what level of encouragement or when pushing your kids does more damage than good. How do you strike that balance between a nurturing posture and one that’s a bit too overbearing?” said Wright.

Indeed, Ochoa’s favorite scene from the movie was a scene between Arlo and Poppa. Poppa takes Arlo out into the field and shows him that when you move your tail over the grass fireflies come out. Poppa’s belief in Arlo’s potential motivates him in his darkest moments in the film.

For Ochoa, the biggest challenge in voicing Arlo, an apprehensive and awkward dinosaur, was being the polar opposite of himself.

I thought Arlo was like this brave dinosaur, because that’s what I think dinosaurs are. They are brave. But that’s not Arlo. He’s very scared. He’s shy. He’s not like how I am. So that was when the real acting had to come out. So, I had to bring out my old self, because I was like that, at one point. So, I had to reach really deep into my old self.

A Family of Ranchers 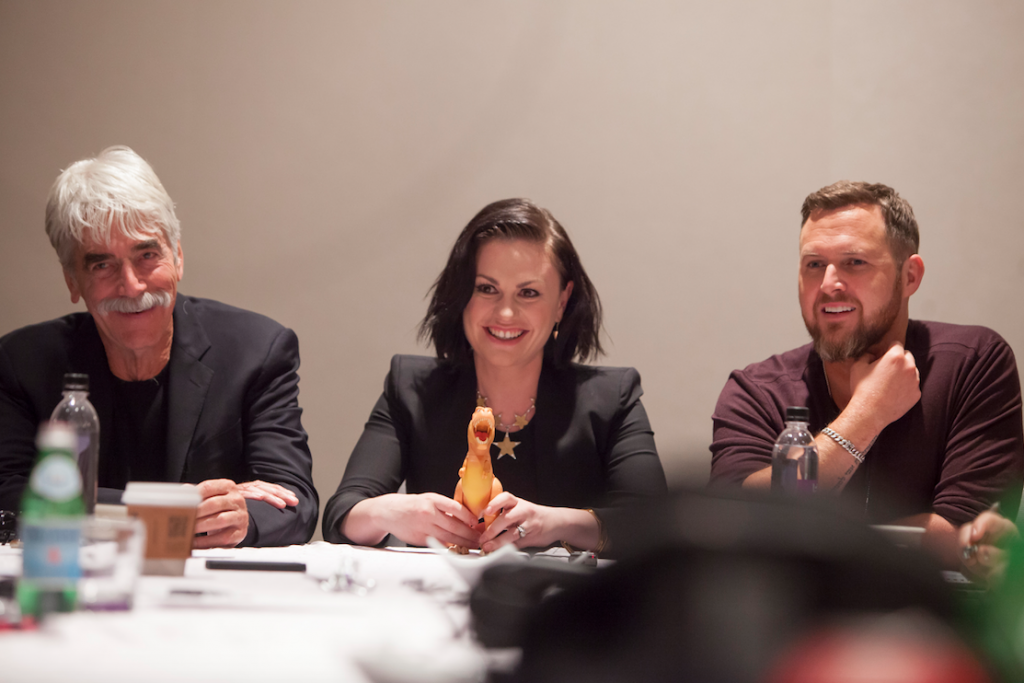 Anna was so excited to play a real badass T-Rex. She’d get red in the face when she roared for Ramsey. -Peter Sohn, Director

In The Good Dinosaur the dinosaurs have evolved and they all have their own occupations. Arlo and his family were settled farmers; whereas, the family of T-Rexes Arlo encounters are nomadic cattle ranchers.

In designing these characters, the filmmakers drew inspiration from old Western movies and cowboys. Indeed, the T-Rexes gallop like horses with the upper body resembling the posture of a cowboy. The whole concept of a T-Rex as a senseless meat-eater is replaced by the family dynamic between Butch, his daughter Ramsey, and his son Nash. Arlo’s encounter with Butch and his family shows how compassionate and generous they are in providing help.

“They’re not typical of any T-Rex that’s ever been presented on film or in animation that I’ve been privy to,” said Sam Elliott, voice of Butch.

Anna Paquin was very excited to lend her voice to one of the movie’s major female characters, Ramsey.

They seemed ever so slightly nervous that I might be offended that they wanted me to be like this big, bad-ass T-Rex,” says Paquin.  “I was so bracing myself to be like some little thing because I’m a girl. And I’m like, “That’s fantastic,” and they’re like, “Really?”  And I’m like, “Yeah, that’s awesome!  I get to be, you know, one of the dudes.

Although they are kind souls on Arlo’s journey, the T-Rexes share their war stories around a campfire. This scene showcases their grit and valor as they navigate through the dangers of the wilderness on a daily basis.

Being Part of the Pixar Legacy

[Getting a call from Pixar] is like getting a call that somebody has made the Olympic team. -AJ Buckey, voice of Nash

In all the roundtable interviews everyone remarked on the honor of being part of the Pixar legacy. Indeed, the release of this film coincides with Pixar’s 20th anniversary. For Peter Sohn, this is his directorial debut for a feature film after previously directing “Partly Cloudy” and voicing beloved characters like Emile from Ratatouille and Scott “Squishy” Squibbles from Monsters University.

Being a first-time director at a place like [Pixar] and the bar’s so high,” says Sohn. “It’s terrifying as an artist and as a person trying to find yourself in this kind of a job. It’s overwhelming. But at the same time, through these obstacles and the support from people like Denise and other directors at Pixar, you begin to find strength. And it’s all through love.

At the heart of it, Jeffrey Wright remarks, “They are really good stories.  It’s really become seriously well-considered storytelling.  And the themes of this one, which are so universal and fairly obvious around parenthood and family and love and responsibility and nurturing, all of these things are so resonant, so that’s really very gratifying to be a part of.”

The Good Dinosaur is out in theaters nationwide Thanksgiving 2015 in 3D.